The official race results of Race 4 of the Rendez-Vous 2017 Tall Ships Regatta are finally in and Union (Peru) finished first on corrected time, you can find the full results here.

“The 4-masted barque B. A. P Union made an impressive debut into the Tall Ships Races and Regattas by gaining line honours and also first place on corrected time on the race from Boston to Canada. She was first to cross the start line and finished just ahead of Eagle after two-days with these two majestic Tall Ships racing within sight of each other all the way. It was one of the closest battles for line honours between two Class A ships that there has been for many years.

“Blue Clipper finished just behind Eagle in third place on corrected time but was in first place in Class B just ahead of her rival Jolie Brise. Spirit of South Carolina finished in third place just one minute and 31 seconds in front of Atyla which highlights just how close and competitive this race leg was. Geronimo won class C/D on corrected time, followed closely by Rona II and Spaniel

“We would like to congratulate all Captains and crews who took part in this race leg for a safe and fast passage and thank them their professionalism, good seamanship and close competition.”

Following the finish of Race 4, the Tall Ships fleet dispersed throughout the Southern Gulf region of Canada and made their way through a series of Guest Ports; Charlottetown, Summerside, Pictou, Pugwash, Port Hawkesbury and Caraquet.

Away from the high energy of racing and four-day host city festivities, the first weekend of Guest Port visits was a chance for vessels to enjoy a pre-planned 48-hour stop-over, or longer, in order to sample the diversity and maritime heritage of different cultures that each Sothern Gulf guest port had to offer. 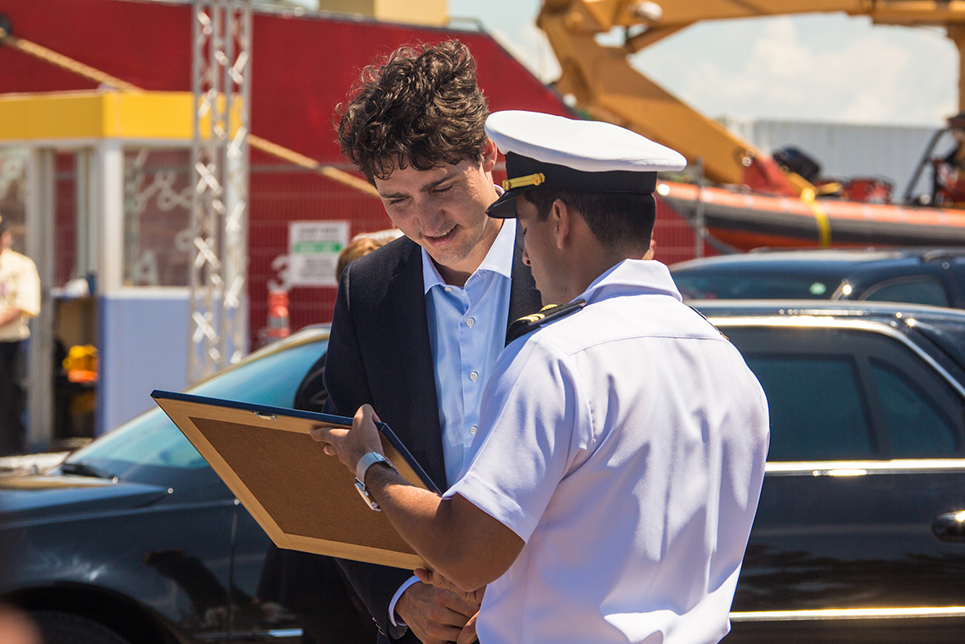 A very special guest in Charlottetown

With a total of nine Tall Ships (Blue Clipper, Eagle, Europa, Union, Jolie Brise, Oosterschelde, Rona II, Oriole, Vahine) visiting over the Canada Day weekend in Charlottetown, there were plenty of festivities and celebrations… and a very special guest.

On Thursday 29 June, the Canadian Prime Minister, Justin Trudeau visited the Tall Ships during a visit to Prince Edward Island. Here he was presented with an commemorative gift from Union (Peru), the newest member of the Tall Ships family, who enjoyed their first Tall Ships event in Boston.

Elsewhere in the first weekend of the Canadian Guest Ports Programme, the Nova Scotia town of Pictou saw over 16,000 visitors flock to see the Tall Ships. There were many attractions on offer in the town including pirate treasure hunts and a stunning morning fireworks display at 7am!

News from the Crew of Gulden Leeuw

We caught up with the crew of Gulden Leeuw (Netherlands) as they visited the beautiful island of Île de la Madeleine and had an insight into the warm welcomes that will be greeting the Tall Ships fleet throughout the Canadian Guest Ports Programme.

“Yesterday we woke up in a small harbor on the beautiful island, Île de la Madeleine. The island looks funny on the chart as it’s filled with lagoons, and has a strange history of going from French to English to French several times. The islanders were super happy to have us there, and the word had gone around the news and the radio that a tall ship had arrived.

“We took the opportunity to invite our welcoming hosts for a few hours of open ship. Our French speakers did their best to try to answer questions in Madeleine Franglais. Everyone also got a few hours off to explore the island – some by foot, some by bike. You can basically bike around the whole island, which is filled with green rolling hills, small colorful houses, lagoons, fishing boats and red cliffs by the sea. In the late afternoon we made a little bit of a show setting sails as we left the harbor.”

The Tall Ships will be continuing the epic Rendez-Vous 2017 Tall Ships Regatta Canadian Guest Ports Programme until they enter Halifax on 29 July. The jewel in the crown of the Canadian Guest Ports Programme will be the arrival of the whole of the Tall Ships fleet into Quebéc City up the Saint Lawrence River. Over 40 vessels will be in port for the magnificent celebrations and thousands of visitors from around the world will enjoy spectacular fireworks, colourful crew parades, and street artist performances.

Further details of all the activities in Quebéc City can be found at www.rdv2017.com/en/programmation.

Following the festivities in Halifax, the fleet will split into two, with vessels either taking part in Race 5 (from Halifax, Canada, to Le Havre, France) of the regatta or continuing on to the Canadian Outport Programme.

This Guest Port programme is an opportunity to sample the hospitality of more than 31 different and beautiful Canadian guest ports in the region. Crews will have the chance to explore the beautiful maritime provinces of Newfoundland, Nova Scotia, Prince Edward Island and New Brunswick, as well as the provinces of Québec and Ontario. Each vessel will be able to take advantage of a programme of events and crew facilities which will be provided in each port.

You can still be part of this adventure of a lifetime. Berths are available for the Guest Ports Programme and Race 5 from Halifax to Le Havre. Why wait? Secure your place today. Check out the available places on our Rendez-Vous 2017 Tall Ships Regatta event pages.

You can book your place directly with a participating vessel, or if you’d like help simply email our friendly team on enquiries@sailonboard.com, who can make recommendations, answer questions and process your booking for you.